A Brief History of Agriculture, Part II – The Birth of Industrial Agriculture 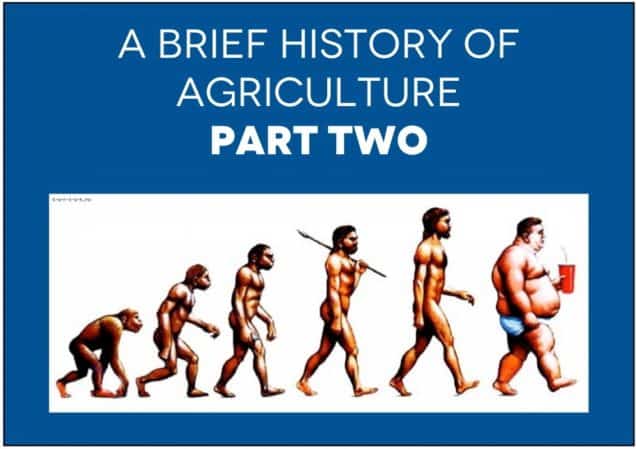 We’re back with the second installment of our series. Last time we discussed the transition from our hunter-gatherer roots to that of an agriculturally based society and the subsequent deterioration in health. Once we made this Faustian bargain, farmers have progressively thought of ways to improve yield and minimize loss. As we discuss in Naked Calories, farmers are not paid by micronutrient density, but rather by look, size and production. So rather than focus on maximizing the quality of the food they are growing, they are more concerned with the volume produced. Unfortunately, this has led to the widespread use of industrial fertilizers and organophosphate pesticides, which has hastened the decline in our health exponentially. These have all led to a shift towards monoculture crops dominated in the United States by wheat, corn and soy. In turn this has paved the way for the development of concentrated animal feeding operations (CAFOs), the scope of which is too great to cover in this series, but which we will cover in the future.

Nitrogen is an essential component as a building block in all forms of life. Plants require nitrogen, in the form of nitrates, for their proper development. Unfortunately, around the time of World War I, a process to fix nitrogen was developed for the production of nitrogen-based bombs; this was later applied to produce synthetic fertilizers that have created the foundation of the modern industrial-agricultural system. Before this, nitrogen cycling was a rate-limiting step in terms of production – insomuch as it was necessary to use animal waste, decaying organic matter (compost), and rotating crops using ones that are capable of fixing nitrogen back to the soil, such as legumes.

While the traditional methods provided for a way to replenish the soil, the growing use of synthetic fertilizers contributed to the rapidly declining micronutrient quality of the subsequent crops. Other health concerns from their use include water contamination, soil acidification and as we previously discussed in our piece on bacon, residual levels of heavy metals such as lead and arsenic. So not only are these fertilizers contributing to crops that yield naked calories, they are providing you with highly dangerous heavy metals.

During World War II, the development of nerve gases for warfare formed the foundation for organophosphate based pesticides. Think about that for a second! A product designed to neutralize an enemy during a time of war was willfully introduced to our food supply!! These chemicals act as acetylcholinesterase inhibitors (AChEI), whereby they block the breakdown of the neurotransmitter acetylcholine. This reaction is necessary to calm down our neurons after firing. Now, there are some potential benefits to low-dose “reversible” AChEI, such as caffeine and Huperzine A in the treatment of Alzheimer’s, glaucoma and as nootropics, or “smart drugs.”

However, the use of these pesticides provides a constant exposure to what are termed “quasi-irreversible” inhibitors. Among the laundry list of side effects in adults are headaches, depression, irritability, nightmares, insomnia, and almost ironically, Alzheimer’s. The EPA also regards it as a carcinogen. Children are particularly vulnerable, demonstrating increased risks towards delayed mental and physical development, behavioral problems and ADHD.

So while this system is clearly detrimental and unsustainable, it is the foundation of our modern agricultural system. While in the past, there was a great deal of crop diversity, such as in China where literally thousands of different varieties of rice are grown, and crop rotation, which was necessary to insure soil integrity, today, only a handful of strains are grown. As we discussed in A Brief History ofAgriculture, Part I, the shift to grains led to inferior nutrition, but at least there was diversity. These “advances” have allowed the agricultural industry to plant the same crops, year after year with minimal replenishment of the soil, thereby resulting in severely micronutrient-depleted crops. Moreover, inbreeding greatly reduces the fitness of a species and since the majority of these plants are so genetically similar, any disease to which they have not been bred to be resistant to, will result in the destruction of entire crops.

Therein lies the rub. In the name of yield and a homogenous product, we have traded nutrition and health for uniformity and quantity. Unfortunately the story doesn’t end there. Next time we will explore how we are digging ourselves in deeper down the rabbit hole towards food products instead of real, rich foods. The invention of genetically modified organisms (GMOs) and our government’s support and/or inaction is hastening the deterioration of our health. In the final installment, we will illustrate the steps necessary to combat this plague.