Micronutrient Competition:
The Secret Battle For Absorption Occuring in
Your Multivitamin or Nutritional Supplement.

Each micronutrient, whether essential or nonessential, vitamin or mineral, differs in form, function and in the amount needed by the body to produce or maintain our individual health. They are absorbed by the body by attaching to receptor sites, or absorption pathways, which act as docking locations for specific micronutrients. These receptor sites are found throughout the entire gastrointestinal tract. For the most part, the majority of micronutrients are absorbed in the small intestine. However, due to something called micronutrient competition the process of absorption can be more like an epic battle scene than a harmonious event. Unfortunately, most supplements companies simply overlook this battle (competition) for absorption during the formulation process of their multivitamins and nutritional supplements.

Science has shown that there are four types of competition that can occur between micronutrients, they are chemical, biochemical, physiological, and clinical competition. Research published in the American Journal of Clinical Nutrition (AJCN), the British Journal of Nutrition (BJN), the Harvard Health Letter as well as many other nutritional and medical based peer-reviewed journals shows that competitions for absorption occur between many of the vitamins and minerals typically found in popular multivitamins. This makes it so that unless specially formulated to prevent micronutrient competition, many of the vitamins and minerals in the typical multivitamin and/or nutritional supplement are simply not absorbed.

INTRODUCING THE WEB OF COMPETITIONS

“When spider webs unite, they can tie up a lion.” ~ Ethiopian Proverb 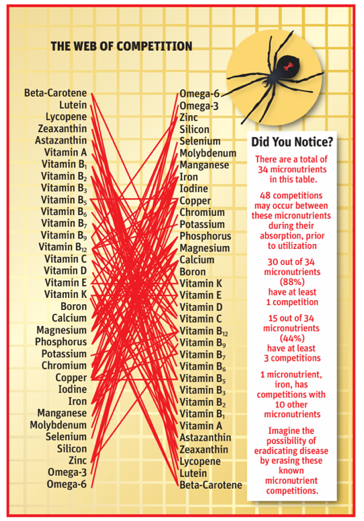 “Teamwork is the ability to work together toward a common vision…It is the fuel that allows common people to attain uncommon results.” ~ Andrew Carnegie 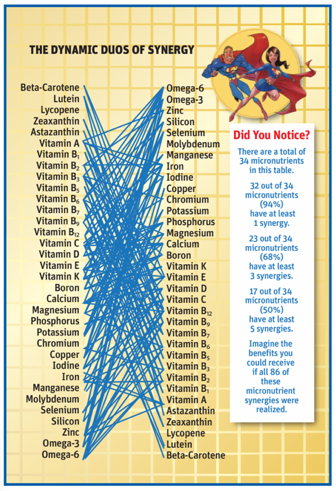 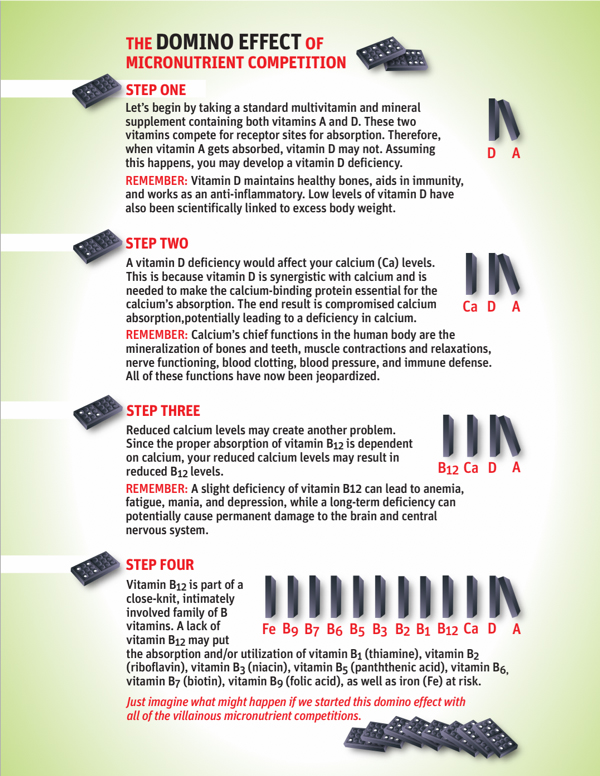 Is your multivitamin stuck in the past?

While the multivitamin is found in almost every home in America, most people don't know its history. First introduced in the 1930's, the multivitamin is still manufactured today using much the same technology as its original prototype. Even though science now understands much more about vitamins than it did back in the early 20th century when they were first discovered, most supplement manufacturers continue to throw them together in their multivitamin and nutritional supplements regardless of known competitions. Unlike the telephone, which has evolved since the 1930's from an antiquated wall-bound talking machine to a handheld personal computer/phone/ipod today; or the television that has gone from a small 13 inch screen, with a black and white picture and manual dial control to a 50 inch, flat screen entertainment center with 3D capabilities, unlimited movie access and voice control; most multivitamins are still stuck in the past.

Anti-Competition™ Technology (ACT) – Bringing The Multivitamin Into The 21st Century!