Coffee, Tea & Caffeine: What You Need To Know!

Coffee is a newcomer to the beverage arena, invented in the seventeenth century AD. However, it has come a long way in the past few centuries. Along with soda and beer, coffee ranks right behind tea as one of the world’s most consumed beverages. While most of us enjoy one or both of these beverages on a regular basis, many are unsuspecting of their terrific health benefits.

Coffee, for example, is the number one source of antioxidants in the US diet, and by a mile. It contains 300 percent more antioxidants than black tea and 3,333 percent more than an apple! Antioxidants have been shown to prevent free radicals from causing damage to cells. Additionally, antioxidant consumption has been shown to reduce the risk of heart disease, depression, Alzheimer’s, Parkinson’s, type 2 diabetes, strokes, cirrhosis of the liver, gout, dementia, and certain types of cancer. 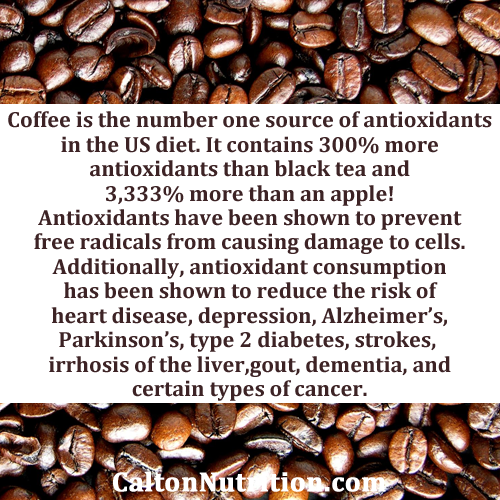 To be fair, caffeine is an EMD due to its slight depletion of calcium. It can cause jitteriness and headaches if consumed in excess. Adding a dollop of calcium-rich dairy or occasionally choosing decaf coffee and tea to balance an insatiable coffee/tea habit might be helpful in decreasing the incidence of such side effects. Caffeine also contains several polyphenols that can inhibit the absorption of non-heme iron, which could lead to iron-deficiency anemia. Additionally, research has shown that coffee consumption can increase the risk of acid reflux.

So here is the bottom line: for thousands of years, tea has been used as a health tonic, and it can be enjoyed daily. Regarding coffee, Frank Hu, MD, MPH, PhD, nutrition and epidemiology professor at the Harvard School of Public Health, says, “There is certainly much more good news than bad news, in terms of coffee and health.” We think these brews are safe bets!

Coffee beans are really the seeds of a coffee berry, from a coffee plant native to tropical and southern Africa and tropical Asia. Ironically, while the coffee plant is not native to Brazil, Brazil is currently the largest producer of coffee (2,874,310 tons a year) with Vietnam, Indonesia, Colombia, and India rounding out the top five. According to the Mayo Clinic, an average eight-ounce cup of coffee contains between 95 and 200 mg of caffeine. A coffee’s color, boldness, and caffeine content is determined by how long a coffee seed (bean) is roasted. The longer the roast, the bolder the flavor, the darker the color, and the more caffeine the coffee loses. So the next time you order a bold coffee, don’t assume that also means the beverage will embolden your attention span. Blond roast, the light-colored coffee, retains more of its natural caffeine. Even with all the health benefits and the tremendous variety of tastes, colors, and blends coffee delivers, it may be the heaviest chemically treated food commodity in the world. The synthetic petroleum-based fertilizers commonly used in coffee production slowly destroy soil fertility and contaminate local water supplies. Buying organic coffee reduces the global use of these synthetic fertilizers and sends a message that you care about clean water, clean soil, and healthy beverages.

To make matters worse, coffee’s popularity is accelerating the rate of global deforestation. Coffee trees naturally grow in the shade of a dense rainforest. To increase productivity, however, nearly 70 percent of the world’s coffee production now comes from sun-resistant coffee tree hybrids. Deforestation occurs as growers make way for more sun-resistant coffee trees. Again, buying organic is preferred because most organic coffee has been “shade grown.”

Think about buying coffee with the “fair trade” label. Using this label requires a certification process, and it indicates that the grower paid a fair wage to laborers. Think of “fair trade” as being to local economies and its workers what “organic” is to the environment and food. While fair trade coffee may cost you a bit more, you are paying it forward by supporting fair wages for workers in developing countries.