What’s really in your food? Food For Life on CNN

Do you know what's in your food? Join us for Food For Life on CNN with host Sanjay Gupta!

Although we didn't have time to touch on all of these ingredients during our Food For Life interview, we wanted you to know all of the worst offenders. Take a look at the clip above, then read through where you can find these dangerous ingredients hiding in your foods. While we are on the topic of dangerous ingredients, we want to extend you a special limited time offer! We have created Rich Food Poor Food as a grocery store guide to use to avoid these kinds of ingredients. In it, we outline brands and ingredients to avoid, as well as ones that are safe! We break it down for you, aisle by aisle, on how you can keep yourself, and your family safe from harmful ingredients. Not only will you be getting your copy of our book for free, you'll also be getting 2 free videos courtesy of that will teach you how to identify scary foods, as well as your very own downloadable wallet size guide, our Fab 14 and Terrible 20 produce guide. All this comes FREE when you order your copy of the book!

These waxy solids act as preservatives to prevent food from becoming rancid and developing objectionable odors, and they’re manufactured from petroleum (yummy!). The U.S. National Institute of Health reports that BHA is reasonably anticipated to be a human carcinogen based on evidence of carcinogenicity in rats. The state of California even lists this ingredient as a carcinogen! These synthetic preservatives have been banned in Japan, England, and many other European countries. BHA and BHT can be found in butter, meats, breakfast cereals, chewing gum, dehydrated potatoes, and beer sold in the United States.

This chemical, whose name just rolls right off the tongue, is banned in Australia, the UK, and in most European countries. In Singapore you can get up to fifteen years in prison and penalized nearly half a million dollars in fines for using it as an ingredient. However, in the good old U S of A, we use this chemical that is primarily used in foamed plastics (think yoga matts and sneaker soles) to bleach flour. In other countries they have to wait a whole week for flour to naturally whiten. Not here! Instead, we add this asthma-causing allergen to numerous grocery store ingredient lists. Also, when azodicarbonamide partially degrades with the heat of processing, it forms trace amounts of semicarbazide, which shows carcinogenicity that can result in tumors over time. Subway has recently been pressured to remove azodicarbonomide out of their products which shows that when consumers take a stand on an ingredient we can make changes.

When a truck carrying azodicarbonomide overturned on a Chicago highway in 2001, it prompted city officials to issue the highest hazardous materials alert and evacuate people within a half mile radius! Many of the people on the scene complained of burning eyes and skin irritation as a result.

Cellulose is virgin wood pulp used as a food extender under many names (cellulose gum, powdered cellulose, microcrystalline cellulose, etc.) It is deemed safe for human consumption, according to the FDA, which regulates most food industry products, however you are now paying top dollar for less “food”. Nowadays, there is even “organic cellulose”. The government agency sets no limit on the amount of cellulose that can be used in food products meant for human consumption. The USDA, which regulates meats, has set a limit of 3.5% on the use of cellulose, since fiber in meat products cannot be recognized nutritionally. Food producers save as much as 30% in ingredient costs by opting for cellulose as a filler or binder in processed foods. Cellulose is common in processed foods, often labeled as reduced-fat or high-fiber — products like breads, pancakes, crackers, pizza crusts, muffins, scrambled eggs, syrup, mashed potato mixes, shredded cheese, and even cheesecake.

We eat with our eyes as much as we eat with our mouths, maybe more! Recent studies have shown that when food manufacturers left foods in their natural, (often beige-like) colors instead of coloring them, individuals thought they tasted bland and ate less, even when the recipes had not been altered. Until the twentieth century, food coloring was obtained from natural sources. People gathered spices, like saffron and turmeric, to add rich hues to their otherwise bland colored foods. While this method may have been somewhat limiting in shades, at least it was safe. Today, most artificial colors are made from coal tar. Not familiar with this fine product? Coal tar is also used in sealcoating products to preserve and protect the shine of industrial floors. It also appears in head lice shampoos to kill off the small bugs. From your morning yogurt to your child’s cupcake sprinkles, most every food manufactured contains coal tar in the form of artificial colors.

Here are the colors to avoid: Blue 1, Blue 2 (studies have shown them to cause brain cancer and inhibit nerve-cell development), yellow 5 and yellow 6 (because they contain the cancer-causing compounds benzidine and 4-aminobiphenyl and Red #40 (may contain the carcinogenic contaminant p-Cresidine and is thought to cause tumors of the immune system). In the UK, products that contain artificial colors must carry a strong warning label and are not recommended for children as they have been shown to cause ADHD.  These artificial colors can be found in cake, candy, mac ‘n cheese, medicines, sport drinks, soda, pet food and cheese. They can also be found in vitamins, both in children's as well as in adults such as centrum silver.

Click the image below to pin it for later, and help spread the word about these poor food ingredients! 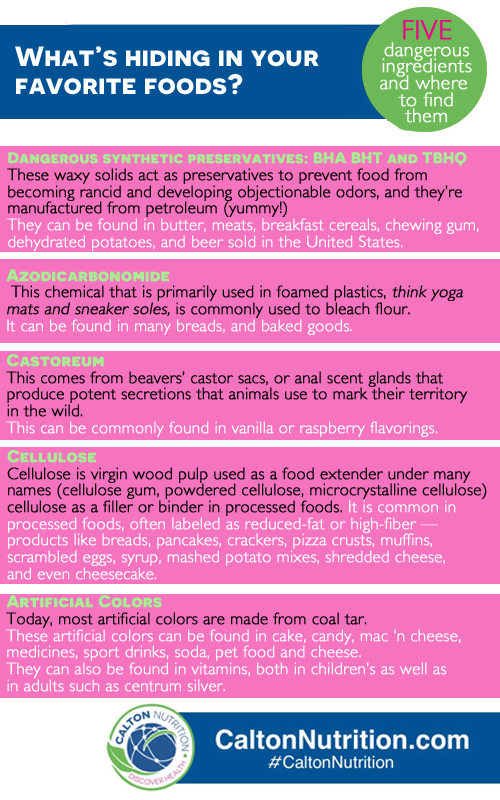