Glyphosate on Non-Organic Produce & How to Protect Yourself!

We've covered the topic of properly choosing produce before, but at this time we want to share more information on just how important this issue might be! Some varieties of non-organic produce has many risks you should be aware of.

Did you know that Monsanto's glyphosate now represents a whopping 83% of all the chemical pesticide use in the United States?  That's RIGHT! Glyphosate, better known as Roundup, was created by Monsanto for spraying on their genetically engineered (non-organic) crops that had been engineered not to die when sprayed with this herbicide that kills pretty much everything else it touches. That is why these GM crops are called “roundup ready.”

Now, as you might expect Monsanto tells us that this herbicide is completely safe, however recent studies are telling us otherwise.

In a recent study published in the International Journal of Environmental Research and Public Health, scientists found that people exposed to Monsanto's glyphosate, aka Roundup, had twice thee risk of developing non-Hodgkin’s lymphoma. The scientists theorized that these pesticides were causing genetic mutations in white blood cells, which weakened the immune systems and made it difficult to fight disease.

In addition, we have written and spoken before about how glyphosate actually kills the weeds by starving them of micronutrients.  Yep…We are back to micronutrients again! When glyphosate is sprayed you can expect the soil to have far fewer minerals, and if you remember from Naked Calories, when there are no minerals in the soil, your food is depleted.  So, not only is the glyphosate likely causing genetic mutations, but it is also starving you of the essential micronutrients you need to stay healthy as well.

And for those of you wondering about the other 17% of chemical pesticides used?  Well, the news isn't to terrific on them either.  Those exposed  to another pesticide, named 2,4-D ( marketed by Dow Chemical) in the same study were 40 percent more likely to develop non-Hodgkin’s lymphoma.

So, enough with the doom and gloom! We have a simple way around this. If you're wondering what you should do when it's time to hit the grocery store in search of your produce, we have created a list just for you. You can avoid 80% of all pesticide exposure by following these guidelines, especially when it comes to choosing non-organic produce.

Obviously, the proponents of GMOs aren’t going to help us avoid their produce. The best option, in a perfect world, to protect you from all harm would be to only purchase organic produce. But who said life is perfect? This is the real world—where we pay real bills and have real budgets. We have to make choices on where to spend our grocery money. To help make this decision easier, we offer you our very own Rich Food, Poor Food produce list to convey which fruits and vegetables are safe to buy conventionally (the Fab Fourteen) and which ones you should never buy conventionally (the Terrible Twenty).

In creating our list, we first took the Environmental Working Group’s yearly compilation of the cleanest and dirtiest produce in terms of pesticide residue. This protected us from toxins but didn’t take into account GMOs. So, next we asked Jeffrey Smith, executive director of the Institute for Responsible Technology, for his recommendations on how to best avoid GMO produce.

By utilizing this easy-to-use produce guide, you can reduce your pesticide exposure by 80 percent and avoid GMO produce 100 percent of the time! If you cannot find a particular fruit or vegetable on the list, that means it fell in the middle somewhere or was not ranked. In these cases, use your best judgment. If you can get it organic without paying too much more, do so; if not, buy it conventionally.

Remember, you can download your free wallet-size version of the following list from the Rich Food Resource Center and bring it with you to the grocery store to pick safe produce that doesn’t break the bank. 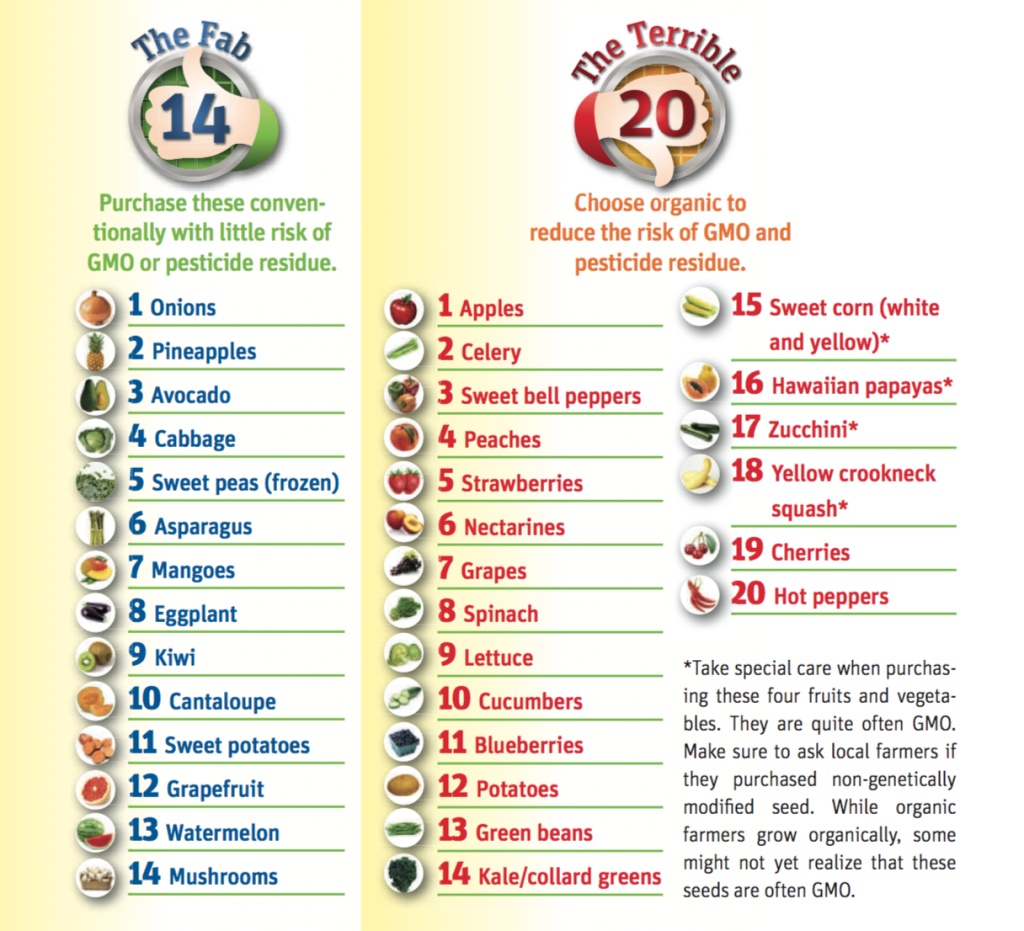 Click HERE to pin this image and save it for later! 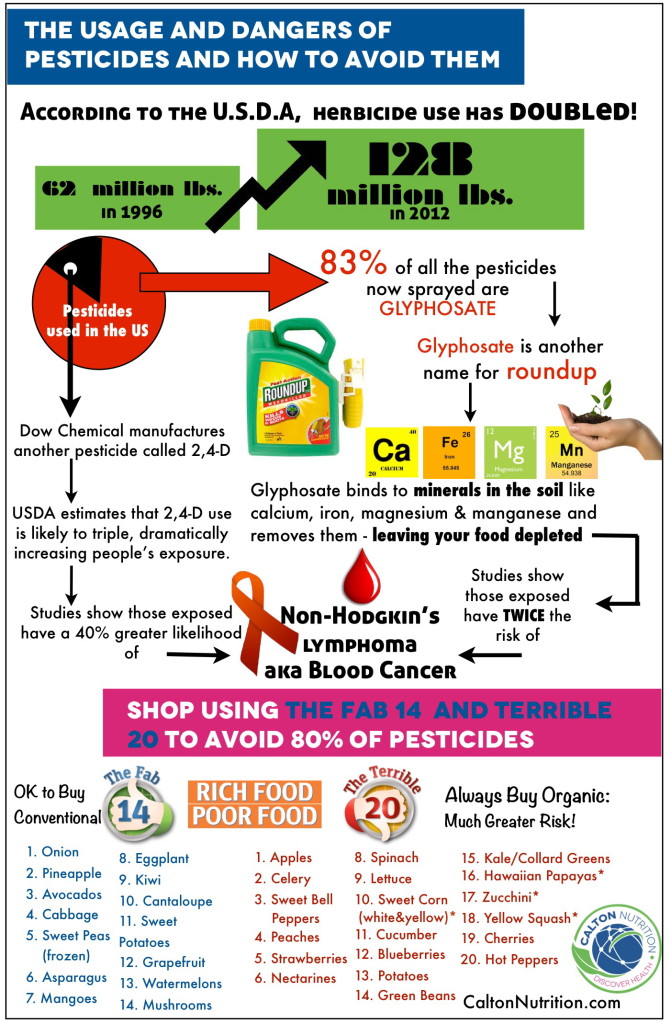