How to Avoid BPA

While you will never find BPA as a listed food ingredient, this toxic troublemaker must be avoided!

BPA is a synthetic estrogen that has been used to package consumer goods since the 1950s. It can be found in reusable drink containers, DVDs, cell phones, eyeglass lenses, and automobile parts. In the grocery store, you are most likely to come in contact with it in polycarbonate plastics used for water bottles and in the lining of food cans. It is even in the thermal paper used for cash register receipts. The BPA used in containers can seep into your food and beverages. BPA is especially good at leaching into canned foods that are acidic, salty, or fatty, such as coconut milk, tomatoes, canned fish, soup, and vegetables. A Center for Disease Control report found BPA in the urine of 93 percent of adults.

According to the Environmental Working Group, “Trace BPA exposure has been shown to disrupt the endocrine system and trigger a wide variety of disorders, including chromosomal and reproductive system abnormalities, impaired brain and neurological functions, cancer, cardiovascular system damage, adult-onset diabetes, early puberty, obesity, and resistance to chemotherapy.” (Watch our video on BPA and weight gain!)

The Food and Drug Administration is concerned and is taking steps to reduce human exposure to BPA in the food supply, so much so that it has banned BPA use in infant bottles. However, until it is removed from all plastics, here are some tips to help you minimize your exposure (click the image to pin it for later!) 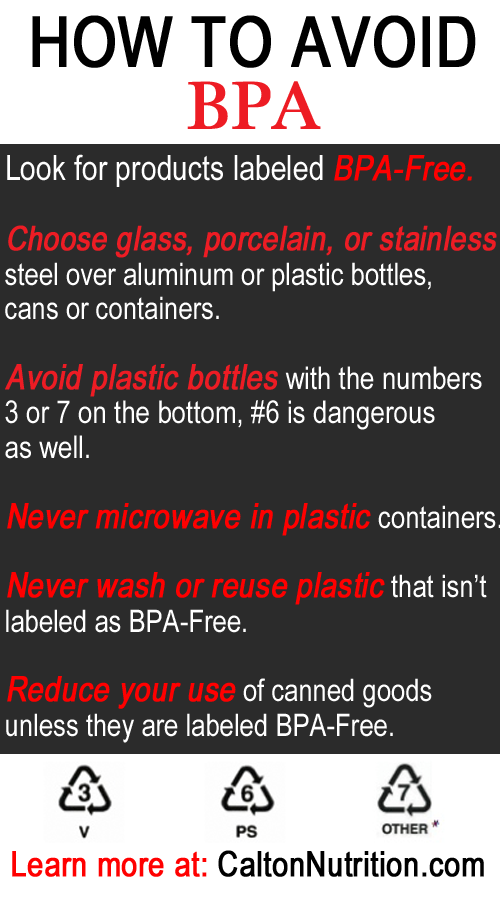 Many companies are slowly removing the BPA lining from their cans. Some companies don't use BPA lining, but do not label their cans to identify which cans are safe. Therefore, identifying BPA-free bottled and canned goods is difficult. Your best bet, and the only true way to be sure is to call the manufacturer and ask them your self. In our book, Rich Food Poor Food, we made it easy by asking them for you. Grab your copy today and join the Rich Food Revolution!