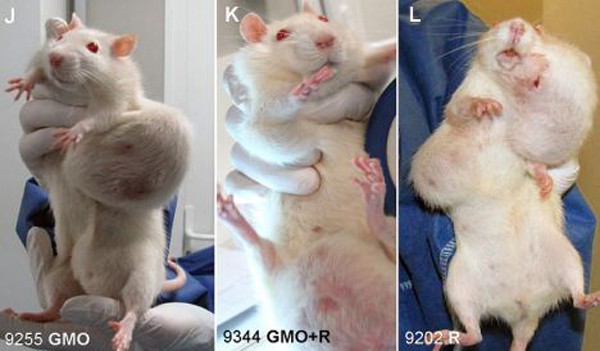 Many people are just now hearing about GMOs (genetically modified organisms) for the first time. GMOs are foods that have been genetically altered in some way and are now being sold to us – without our knowledge – in grocery stores across the country. While some people have withheld judgment concerning the potential safety of GMOs on human health until credible research could be conducted, that research has now been done and according to the first ever study conducted on the long-term (lifetime) effects of eating GMOs, led by Gilles-Eric Seralini of the University of Caen – Eating genetically modified (GM) corn and consuming trace levels of Monsanto’s Roundup chemical fertilizer (the fertilizer the corn was genetically modified not to die from when exposed too) caused the rats being studied to develop horrifying tumors, suffer widespread organ damage, and die a premature death. The study was published in The Food & Chemical Toxicology Journal (read here) and was recently presented at a London news conference where it prompted media frenzy. The Daily Mail reported:

“The animals on the GM diet suffered mammary tumors, as well as severe liver and kidney damage. The researchers said 50 percent of males and 70 percent of females died prematurely, compared with only 30 percent and 20 percent in the control group.”

It went on to say: “France's Jose Bove, vice-chairman of the European Parliament's commission for agriculture and known as a fierce opponent of GM, called for an immediate suspension of all EU cultivation and import authorisations of GM crops. ‘This study finally shows we are right and that it is urgent to quickly review all GMO evaluation processes,' he said in a statement. ‘National and European food security agencies must carry out new studies financed by public funding to guarantee healthy food for European consumers.' (read here)”

Just in case you think that these rats were eating GMO corn that is not available for human consumption, let us be clear – the study fed the rats NK603, the very same Monsanto variety of GMO corn that is grown all across America and is routinely feed to both animals and humans. Don’t eat corn? Think again, corn is in almost every product in the grocery store in some form or another. We should know, we just finished our new – must have – grocery store shopping guide called Rich Food, Poor Food – Your Personal Grocery Purchasing System (GPS), which will be coming out in November. In it, not only do we take a strong stance FOR labeling genetically modified (GM) foods, but we teach you exactly how to avoid GMOs and other potentially harmful ingredients commonly found in our modern food such as, pesticides (like roundup), hormones, antibiotics and a host of other Poor Food ingredients.

Whether you are for or against GM food, your right to know what you are eating is a fundamental one. Without proper GMO labeling we cannot make a conscious, educated choice one-way or the other. If you are still not sure if eating or feeding your family those non-organic corn-based snack chips, tortillas, or breakfast cereals is a good idea, take a moment to read what these researchers had to say:

“This research shows an extraordinary number of tumors developing earlier and more aggressively – particularly in female animals. I am shocked by the extreme negative health impact… We can expect that the consumption of GM maize and the herbicide Roundup, impacts seriously on human health.”  – Dr Michael Antoniou, molecular biologist, King's College London.

“This is the first time that a long-term animal feeding trial has examined the impact of feeding GM corn or the herbicide Roundup, or a combination of both and the results are extremely serious. In the male rats, there was liver and kidney disorders, including tumors and even more worryingly, in the female rats, there were mammary tumors at a level which is extremely concerning; up to 80 percent of the female rats had mammary tumors by the end of the trial.” – Patrick Holden, Director, Sustainable Food Trust.

It was shocking for us to find out that no long-term studies were ever mandated by the FDA or USDA before GMO corn was approved for animal or human consumption and that GMOs are as prevalent as they are in our food supply. For example, did you know that according to the Center For Food Safety up to 85% of U.S. corn, 91% of soybeans, 88% of cotton (cottonseed oil is used in food products) and 95% of sugar beets currently on the market have been genetically modified? In fact, upwards of 70% of all processed foods in grocery stores across America contain GMOs. This is one of the big reasons we decided to write Rich Food, Poor Food, so that you, as a consumer, can learn to determine exactly which foods are the most micronutrient-rich as well as safe for your family. Not only do we teach you how to identify GMO ingredients in order to avoid them, we also help you to steer your cart clear of other dangerous ingredients. Some – like sugar and high fructose corn syrup you may have heard of, but others, like disodium EDTA, benzoates and BVO you may still be unaware of.  In Rich Food, Poor Food we guide your cart through every aisle of the grocery store, from produce to poultry – drinks to desserts, helping you fill your cart with everything you need to live your optimal life.

We will keep updating you over the next few months as to the latest on America’s fight to label GMOs.  We urge you to support your right to know – support labeling foods that contain GMOs!