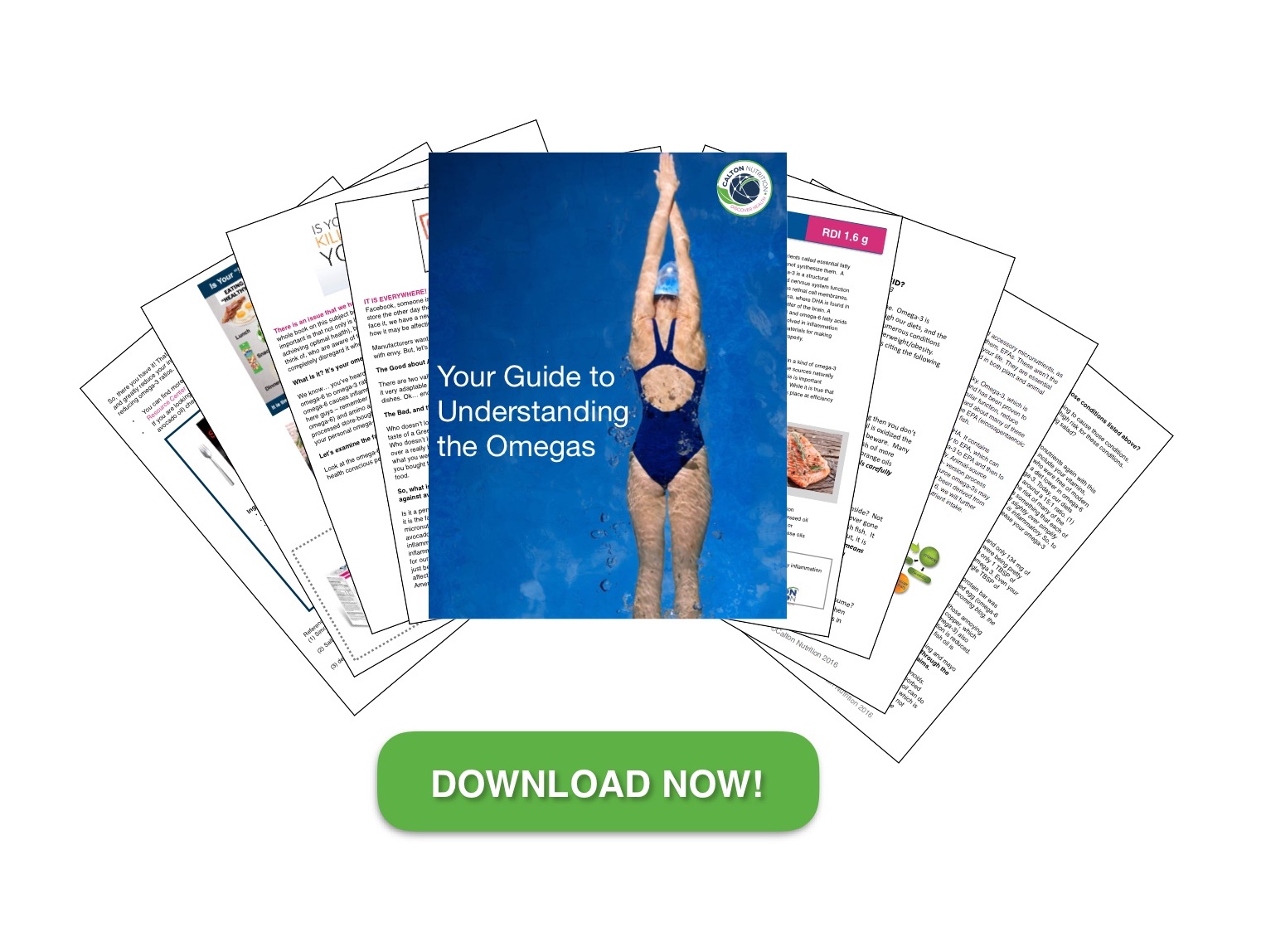 We have another new family member here at Calton Nutrition! No, it’s not a baby.

We have a rule here at Calton Nutrition— we don’t create a new product unless we can improve on what is currently on the market. Meaning that we didn’t create nutreince simply to come out with another multivitamin, instead we created nutreince as a complete reinvention of the multivitamin that eliminated the 3 major problems we identified in inferior supplements. No other multivitamin in the world is formulated the same way nutreince is and that makes it unique. The same goes for SKINNYFat, IN.POWER and now Origin Omega, the first and only omega-3 fish oil supplement to be formulated using our patented Anti-Competition Technology.

You may have noticed that we have been writing a lot lately about the health benefits associated with having an omega-3 to omega-6 ratio of approximately 1:1. We have also been talking a lot about how important it is to take an omega-3 supplement that delivers beneficial quantities of EPA and DHA. Unfortunately, when we took a good hard look at the omega-3 supplement market, we saw three big problems with almost all of the fish oil products that our clients were purchasing.

The three problems with most fish oil on the market:

Ok, now we know that this IS NOT a biochemistry class, but stick with us here and we will address these three problems in a simple and easy to understand way…and most importantly we will make it very clear as to why Origin Omega is far and away the most innovative and advanced omega-3 supplement on the market right now!

First you should know that many products on the market today are using the less expensive Ethyl Ester form over the superior Triglyceride form that we chose for Origin Omega. Put plainly, while ethyl esters are seemingly safe for human consumption, scientific research consistently confirms three facts:

Omega-3 Purchasing Tip #1: As a consumer it is important to know this information so that you can do you research and find a high quality fish oil supplement, like Origin Omega that is delivered in a superior, highly stable, highly absorbable triglyceride form.

Next, let’s explore the second issue, the fact that most omega-3 supplements either have no EPA and DHA or such small quantities that the consumer would never be able to reach the dosage shown in published research to be beneficial. The truth is, while plant derived omega-3 (like flax or chia) has some benefits, they do not contain EPA or DHA. Instead they only contain something called alpha-linoleic acid (ALA), which the body has to convert into EPA and DHA. The problem with plant based omega-3 supplements is that this conversion rate from ALA to EPA and eventually to DHA only happens at a rate of between 5-10% for EPA and 2-5% for DHA. (8) Even at the highest conversion rates that means that a 1000 mg plant derived omega-3 capsule would only produce 100 mg (10%) of EPA and 50 mg (5%) of DHA. (As you will see this is nowhere near what is considered to be beneficial by the medical and nutritional communities)

Omega-3 Purchasing Tip #2: Read the labels carefully to insure that you are getting super potent levels of both EPA and DHA—if the levels are low or are not listed move on. Higher concentrations both save you money and require you to take fewer capsules.

Lastly, let’s discuss perhaps the most important issue of all; the fact that even if an omega-3 supplement were to deliver beneficial quantities of a triglyceride form of omega-3 (containing both EPA and DHA), the EPA and DHA are combined in the same dose, reducing the absorption potential due to inherent micronutrient competitions. Amazingly, the competition between EPA and DHA is widely known throughout the scientific communities, but is virtually unknown by the consumer.

Each micronutrient, whether essential or nonessential, vitamin, mineral, or essential fatty acid (like omega-3) differs in form, function and in the amount needed by the body to produce or maintain our individual health. They are absorbed by the body by attaching to receptor sites, or absorption pathways, which act like docking locations for specific micronutrients. However, due to something called micronutrient competition the process of absorption can be more like an epic battle scene than a harmonious event. Unfortunately, most supplements companies simply overlook this battle (competition) for absorption when formulating their nutritional supplements.

However, as you can imagine, micronutrient competition is not something that should be ignored or overlooked when formulating a high quality omega-3 supplement since the two key components of omega-3, EPA and DHA compete with one another for absorption. This is because DHA has a relatively similar structure to EPA and they compete for binding to the active sites for absorption. Thus the EPA and DHA will compete for occupation of these active sites and reduce their activity. The purer the preparation of the EPA and DHA, or the more that these competitions are eliminated, the more likely is it be properly absorbed and utilized by the body. Scientists agree and state that separating EPA and DHA will allow them to do their job. (9)

That is why we formulated Origin Omega, utilizing our patented Anti-Competition Technology. By splitting Origin Omega into two daily servings delivering 710 mg of EPA in the AM dose (with only 50 mg of DHA) and 710 mg of DHA in the PM dose (with only 50 mg of EPA), we have all but eliminated the competition between EPA and DHA. Origin Omega is the ONLY omega-3 supplement formulated with Anti-Competition Technology, allowing you to rest assured that your body is getting the purest omega-3 fish oil in the superior triglyceride form, with the highest potency EPA and DHA, delivered at two separate times during the day to guarantee optimal absorption rates and extraordinary results.

Omega-3 Purchasing Tip #3: Read the labels carefully to find a fish oil product that separates the competing EPA from the DHA in order to increase absorption rates of these two key components.

WE ELIMINATED THESE 3 PROBLEMS AND CREATED OUR UPGRADED ORIGIN OMEGA

As with all of our innovative products, we first investigate the shortcomings of other products on the market, and then create a new, superior product that solves all of those discovered issues. 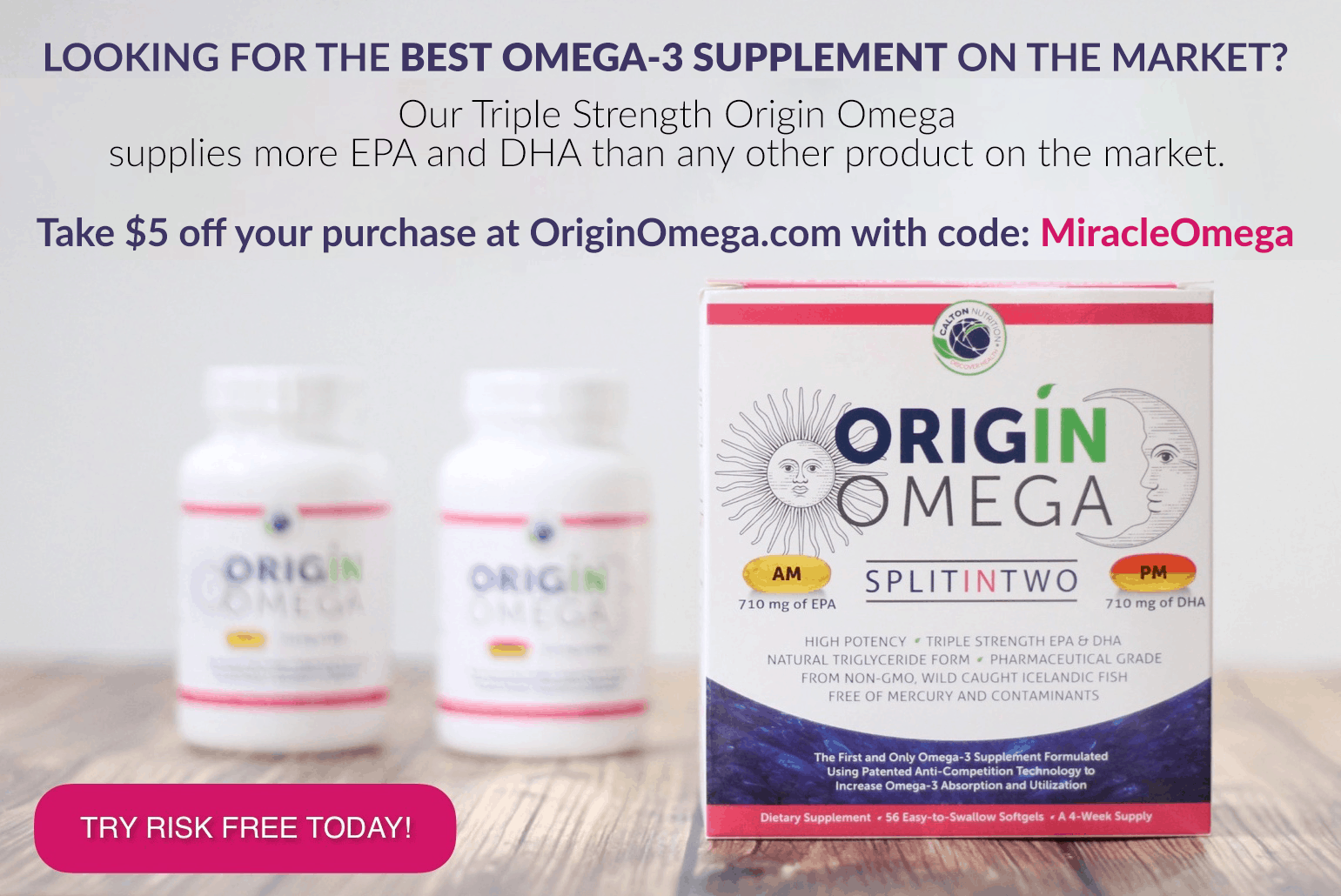 (Coupon code is good for $5 off a first purchase of Origin Omega  Available for in-stock merchandise only, while supplies last. This offer cannot be combined with other offers or coupon codes. Sorry, no rainchecks. Discount cannot be applied to any previous purchase.)

Privacy Policy: We hate SPAM and promise to keep your email address safe.
Wait…don’t forget your FREE copy of The Micronutrient Miracle Guide to Your Omegas. Just stay with us for just a few minutes more and at the end of the video we will tell you how to get this FREE info packed guide (Tip: there’s a $5 coupon inside).
We use cookies to ensure that we give you the best experience on our website. If you continue to use this site we will assume that you are happy with it.OkNoRead more
Revoke Cookies