Attention all Starbucks fans, you asked for it and you got it, or did you?

In a recent press release Starbucks announced that as of February 17th they will be offering coconut milk as an alternative creamer to dairy or soy. What could be better? For years we have praised the benefits of coconut milk and are thrilled that many of you have heard our message. As we stated in ‘Rich Food, Poor Food’, coconut milk naturally boosts the immune system by means of its great micronutrient content (Calcium, Magnesium, Potassium, Phosphorus, Manganese, Copper, Zinc, Iron, Selenium, Vitamins C & E), micronutrients essential for the prevention of Cardiovascular disease, High Blood Pressure, Diabetes, Depression, Osteoporosis and many other illnesses. In addition coconut milk contains a type of fat known as MCT (medium-chain triglycerides) which is an antiviral and antibacterial. MCT can convert almost immediately into energy in the body and can actually assist in the metabolism of stored fat in the body.

While we applaud Starbucks for actually listening to their clientele and implementing their customers request, we would like to say to them what we are constantly telling you, “READ THE LABEL, LOOK AT THE INGREDIENTS” of the coconut milk that you chose. We did! 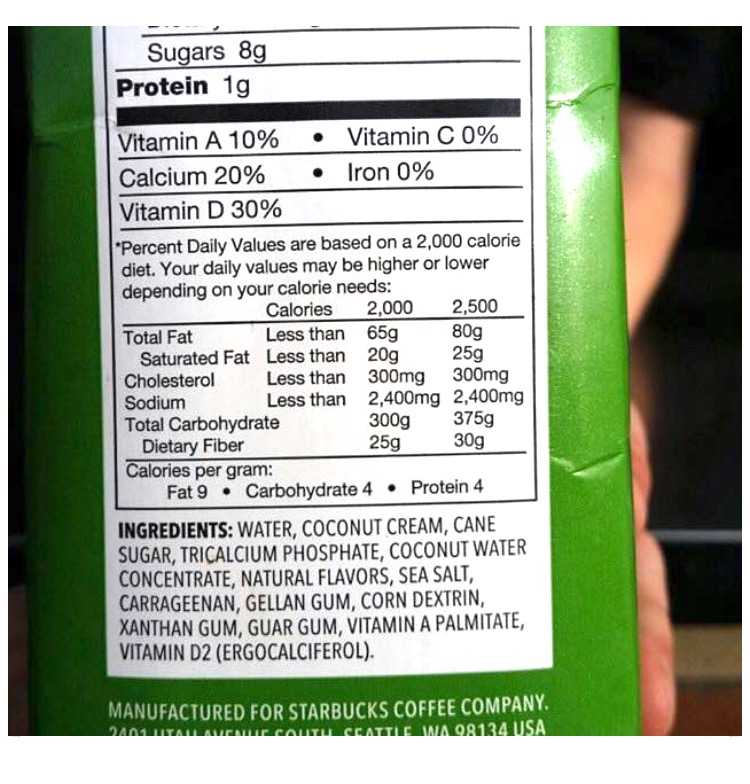 Cane Sugar: admittedly not the same as refined white sugar, cane sugar can still raise insulin levels which in turn can cause your body to store fat and contribute to type 2 diabetes. Cane sugar can also cause Chromium and Copper deficiencies and block the absorption of Calcium and Magnesium negating the benefits of the coconut milk in the first place.

Sea Salt: they don’t say, it that refined or unrefined sea salt? If it’s unrefined sea salt great. Unrefined sea salt is jam-packed with more than 90 minerals including Sodium, Chloride, Calcium, Magnesium, Potassium, Iodine, Silicon, Sulfur, Phosphorus, and Vanadium which can actually help to lower your cholesterol and high blood pressure. However if it’s refined sea salt than all essential minerals except for Sodium and Chloride have been stripped away and replaced with toxic chemical anticaking agents that work to prevent the salt from mixing with water. Good for a products shelf life not good for your body.

Carrageenan: an additive often used to de-ice airplanes. Yes we did say to de-ice airplanes! Carrageenan may also contain MSG (mono sodium glutamate) a chemical compound that can cause side effects such as changes in blood pressure, joint pain, diarrhea, blurred vision, irregular heartbeat, depression, anxiety and migraines just to name a few. Suddenly we are beginning to wonder if we really want a cup of coffee with Starbuck’s coconut milk.

Corn Dextrin: as we pointed out in ‘Rich Food, Poor Food’ 86% of all corn grown in the United States is genetically modified (GMO). Although no human clinical studies have been published to date, a few animal studies done using GMO’s doesn’t look too promising and are leaving scientists worried as to how our bodies will be affected by these unknown mutant genes.

Xanthan Gum: a thickening agent found in many sauces and salad dressings, most often derived from wheat, corn, or soy, which at this point we have to ask is this another GMO sneaking its way into our bodies? More often Xanthan Gum is added to foods such as ice cream to create a smooth texture in the mouth. We wonder, how do the poor people on Caribbean Islands suffer though natural coconut milk without this thickener? Oh, by the way, if any of the good micronutrients produced naturally in the coconut milk have actually have magically found a way into your body they may not be there for long you see Xanthan Gum is also a laxative.

Guar Gum: guar gum is a thickener and acts as an EMD (Everyday Micronutrient Depleter) significantly reducing the absorption of the carotenoids Beta-Carotene, Lycopene, and Lutein which help to preserve and improve vision, fight viral infections, and fight cancer.

Vitamin D2: what most people don’t know, is that there are two forms of vitamin D that can be used in supplements or fortification of food: vitamin D2 (ergocalciferol) and vitamin D3 (cholecalciferol). D3 is the form that is produced in our skin when we are exposed to sunlight, and is more biologically active and superior to D2. So which type of vitamin D did Starbucks put in their coconut milk? D2 of course, and don’t be fooled by that 30% next to vitamin D on the supplement facts, according to research published in The American Journal of Clinical Nutrition, individuals who took vitamin D2 actually saw a reduction in their overall serum concentrations of vitamin D (25(OH)D) over 28 days, with there serum concentrations actually falling below baseline (starting) levels! The researchers concluded that that vitamin D2 should no longer be regarded as a nutrient appropriate for supplementation or fortification of foods. Maybe someone should tell Starbucks.

Once again we can only say “READ THE LABEL, LOOK AT THE INGREDIENTS” sometimes what seems like a good thing is NOT really such a good thing. As for us the next time that we drop by Starbucks for coffee we’ll pass on this poor food and leave the coconut cream-ator alone.