The Vitamin D3 you’ve been asking for…

As you know we do not release very many NEW products here at Calton Nutrition – and that is because we only want to manufacture products if we can improve on what is currently on the market. So you may be surprised to see two new, relatively common products, in our Calton Nutrition product line – a liquid vitamin D3 supplement (out now) and a liquid vitamin K2 [MK7] supplement (coming soon).

Today we are going to talk about our new liquid vitamin D3 supplement. Now, as you know, there are a ton of liquid vitamin D supplements on the market. So what’s wrong with them? Well, we have a lot of people who have their doctors test their micronutrient levels, and many of them come to us to ask about why one or more of their essential micronutrients may be deficient. Again and again we have had people who were taking the vitamin D supplements their health care providers had recommended, coming back deficient in vitamin D. Even when taking doses as high as 10,000 IU per day (1250% of the RDI)!

When we looked into why this was we found four common reasons they were not reaching micronutrient sufficiency for vitamin D:

Some people had one of these issues and some had more than one. In this blog we will take an in-depth look at vitamin D, as well as these four issues and discover why each can block your ability to absorb your vitamin D.

My Doctor Says I Have Low Vitamin D – Now What Do I Do?

After being diagnosed with low vitamin D levels, most people find themselves staring at a packed drugstore shelf of vitamin D supplements. Though they know vitamin D can help keep bones strong and their body healthy, which type do they choose? Do they really need it? At what dose? What is safe — and what is effective?

So What Does This Vitamin Do?

Vitamin D is both a vitamin (we have to consume it to live) and a hormone: a chemical messenger that moves around the body and tells cells what to do. Vitamin D is bossy. It tells the gut to make calbindin to help absorb calcium and helps keep calcium and phosphate levels in a tight range so bones form and muscles contract properly. It alters the behavior of cells that regulate growth, development, and planned death of other cells. Vitamin D even reduces inflammation and modulates neuromuscular and immune function. This is possible because the receptor where vitamin D talks to the cell is found all over the body— intestine, pancreas, kidney, skin, lungs, bone, immune cells, some endocrine glands, and even reproductive tissues!

Not only does vitamin D enhance calcium absorption to support healthy bones, many health professionals, like ourselves, use vitamin D to prevent and support other conditions associated with vitamin D deficiency, such as:

A Boston University study on vitamin D revealed that women without adequate vitamin D had a 253% increased risk of colorectal cancer and a 222% increased risk of breast cancer. Additionally, studies out of Mt. Sinai Hospital in Toronto, Canada, showed that women with low levels of vitamin D at diagnosis, are 94 percent more likely to have the cancer metastasize, and 73 percent more likely to die within ten years of diagnosis.

Similarly, a study in the journal Neurology showed that vitamin D deficiency doubled Alzheimer’s risk. Moreover, in a study in the American Journal of Clinical Nutrition, 800 IU of supplemental vitamin D daily reduced heart failure risk by 25%. And in our first book Naked Calories, we revealed that a study from Children’s Hospital in Los Angeles found that women who were deficient in vitamin D were, on average, 16.3 pounds heavier than women who were not vitamin D deficient. Whether you are focusing on your health today or in 20 years, vitamin D sufficiency is critical!

Because sunlight drives natural vitamin D production in skin, and most of us spend our days indoors, the answer is likely yes. However, what most people don’t know is just how deficient we are. According to the Centers for Disease Control and Prevention, a whopping 93% of Americans, regardless of age, are deficient in vitamin D. But even more shocking is the fact that 70% of the US population is vitamin D deficient, even after factoring in dietary supplements! This is why understanding how to supplement smart is so important – you need to know that the supplement you chose is doing its job.

Who is likely to be vitamin D deficient?

Obesity is associated with lower vitamin D levels because fat sequesters this vitamin. Sadly, low vitamin D drives down levels of the hormone leptin, which are correlated with metabolic disease and obesity.

(Protect Yourself: Read our complete blog and free download on 11 antinutrients that cause vitamin and mineral malabsorption here)

What’s the D-fference Between Vitamin D2 and Vitamin D3? A Lot!

Always choose vitamin D3. Vitamin D3, also known as cholecalciferol, it will help raise overall vitamin D levels and is considered safe at low to moderate doses. Do not supplement vitamin D2, also known as ergocalciferol. Despite previous belief that both forms were safe and effective, in a study from the American Journal of Clinical Nutrition, vitamin D2 supplementation was shown to increase D levels in the short term, but actually reduced overall vitamin D levels in just 28 days! The researches concluded that not only have “no successful clinical trials to date shown that vitamin D2 prevents fractures…vitamin D2 should no longer be regarded as a nutrient appropriate for supplementation or fortification of foods.” Many practitioners still prescribe megadoses of D2 for deficiency, so be aware.

So How Do You Get Enough Vitamin D?

Get outside. However, if you live north of Atlanta, during the winter months you will likely need more support than the great outdoors. During the summer and for those who live south of Atlanta, if you have fair skin, you need to have your arms, legs, and face exposed to sunlight at midday [between 11am -1 pm] for at least 10 -20 minutes without sunscreen to meet the RDI of vitamin D, and that time increases for those who are older or have darker skin. In the winter those time increase further to 1-2 hours.

Very few foods contain Vitamin D. The flesh of fatty fish (like salmon, tuna, or mackerel) and fish liver oils are the best natural food sources of vitamin D3 (but also usually contain high amounts of vitamin A which reduces the absorption of vitamin D). Small amounts are also found in beef liver, cheese, egg yolks from chickens that roamed outdoors, and mushrooms exposed to UV light. Most Americans get their vitamin D from fortified dairy and dairy-alternative products (but watch out, many are fortified with vitamin D2). Check out our guide to non-dairy milks for some d-licious options!

In our modern world, most of us must supplement. The RDI for vitamin D is currently 800 IU per day for children/adults, however many health professionals believe that supplementing with a minimum of 2000 IU per day is beneficial.

Many multivitamin supplements deliver less than 800 IU of vitamin D3 or use vitamin D2 (or don’t specify as to whether they include D2 or D3), so you’ll have to pay close attention. Examples of a few popular multivitamin brands that use D2 include BioCare, Green Source and Solgar, among others.

What Do We Recommend?

We agree with those health professionals who recommend supplementing 2000 IU daily of vitamin D3 as a safe and effective dose for most people. In 2011, the Endocrine Society issued clinical practice guidelines stating that vitamin D levels must be at least 30 ng/ml (75 nmol/l) to get its beneficial effects. According to this report, we need approximately 2000 IU per day of supplemental vitamin D to achieve this level. This is why we put 2000 IU of Vitamin D3 in our multivitamin – Nutreince – so you can reap the benefits without worrying about taking too much– or too little! And for those who need a bit more, we have our liquid vitamin D3 supplement delivered in organic long chain fats (to help with absorption), which you can use in addition to nutreince. Regardless of supplementation, get outside. Consider that our ancestors were outside a lot, and we are not. Factors that affect vitamin D production in the skin include the season, time of day, length of sun exposure, cloud cover, smog, skin melanin content and sunscreen. For easy guidance on safe and effective sunscreens, check out our article on the science of suntan lotion — and go get that vitamin D! 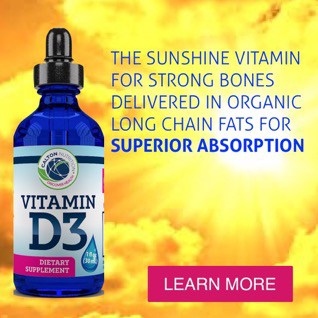