To Salt or Not To Salt… That is the Question!

To salt or not to salt… that is the question! (Or as we like to say…could your low sodium diet be killing you?)

When was the last time you put salt on your food? Or rather, when was the last time you or someone you know refrained from putting salt on their food? While it may not be talked about as often as sugar, the use of salt still remains a hot topic of debate. For many years now, the medical community has advised the public to keep salt intake to a minimum. So much so, that low salt diets have popped up everywhere and one would be hard pressed to walk down any isle of the grocery store with out seeing products emboldened with seemingly positive claims of containing “low sodium” or being “unsalted”. But is this celebrated recommendation actually doing more harm than good?

Why Are We Talking about Salt at all?

The first thing you need to know about sodium (if you are going to be able to determine whether or not you may be deficient in the vital mineral) is that it has a Reference Daily Intake (RDI) of 2300 mg. This means that according to the US Food and Drug Administration (FDA), unless you ingested 2300 mg of sodium daily you would be found deficient. However, the American Heart Association (AHA) recommends no more than 2,300 milligrams a day with an ideal limit of no more than 1,500 milligrams per day for most- adults. [1]).   And this is where the we have to start questioning these recommendations, because the American Heart Association’s “ideal” recommendation of 1,500 milligrams of sodium per day would leave you deficient in reaching the RDI by 800 milligrams.

A recent study published in the American Journal of Hypertension reports that intakes of sodium either below 2,645 milligrams or above 4,945 milligrams per day are associated with an increased rate of mortality and cardiovascular disease. What’s the surprise here? The optimal intake (between 2645 mg & 4945 mg) that was shown to reduce mortality and cardiovascular related disease rates is again higher than what the AHA’s recommendations—and even higher than our current RDI for sodium. This study reveals that by following the AHA’s guidelines you are not only leaving yourself deficient in RDI requirements for sodium, but that you are also increasing your risk of cardiovascular disease and mortality. Exactly the opposite of what most people think a low sodium diet will do for them!

Additionally, a second worldwide study published in the prestigious scientific journal The Lancet rocked salt’s world. It revealed that a low sodium diet actually had a negative effect on rate of mortality and cardiovascular disease regardless of whether or not a person had high blood pressure or normal blood pressure. This study adds fuel to the fire that lowering sodium intake to levels below micronutrient sufficiency in this mineral may not be the answer to increasing longevity and cardiovascular health.

Right about now you might be saying, “Wait a minute, I have always heard that someone who has high blood pressure needs to follow a low sodium diet.” The truth is more and more studies are continuing to find evidence that challenges this conventional view. A 2014 Cochrane review assessing the long-term effects of low-sodium intake and its effects on cardiovascular health and blood pressure according to eight different studies found that there was insufficient evidence to clinically confirm the benefits of dietary reductions of salt, whether it was in otherwise normal healthy people or those with hypertension, concluding that its findings, “…did not support individual dietary advice as a means of restricting salt intake.”

According to Andrew Mente, the lead author of the Lancet study we mentioned before, “Low sodium intake reduces blood pressure modestly, compared to average intake, but low sodium intake also has other effects, including adverse elevations of certain hormones which may outweigh any benefits. The key question is not whether blood pressure is lower with very low salt intake, instead it is whether it improves health.” [2]

Every Deficiency Leads to Health Ramifications

One of the hormones that the lead author alluded to is Renin, which can become inflammatory when in excess. Renin is over-produced when too little salt is ingested, and causes the body to retain even more sodium in order to maintain fluid balance and blood pressure. [3] But that’s not all a low sodium diet can do. With it comes a very dangerous deficiency in the blood known as Hyponatremia, which can bring about several symptoms including:

What’s even worse is the domino-like effect of other deficiencies that follow suit if left untreated. These deficiencies come from imbalances in both essential minerals and electrolytes within the body, and they too bring about complications of their own. Be aware that if you suffer from digestive disorders, an underactive thyroid, autoimmune disease, or cancer, are regularly active (in sports, manual labor, hiking, intense exercise, etc), taking diuretics, over the counter laxatives, or antidepressant medications, and living in hot climates, then it is of utmost importance that you make an even greater effort to avoid a deficiency in sodium. [4] [5]

Salt is not the enemy. In fact, the sodium it delivers is an essential micronutrient that is a vital source of life-supporting nutrition. As we mentioned before, a deficiency in sodium can become dangerous, and even lethal. So much so that in behavioral lab studies, animals that were put in a sodium deficit state would go out of their way and openly seek out salty food and saline drinking spouts in order to restore their hydration and sodium stores. These actions demonstrate a natural response that all living things have whenever they are not getting enough sodium in their diet! [6] Yet the benefits of salt, and the importance of getting enough sodium continue to be overlooked.

But there is yet another benefit to salt that just cannot be overlooked – it adds flavor to our food! There is an old adage in the culinary arts that states, “No fat, no salt, no flavor!” Let’s face it, salt is a culinary rock star that makes almost any food taste better, bringing out amazing flavor in your favorite steak, chicken or fish dishes and can even help to boost your vegetable intake by cutting through the bitterness of foods like kale, dandelion greens, endive, arugula, or broccoli rabe, making them far more palatable and, surprisingly, delicious.

All Salts Are Not Created Equally

Now before you start pouring on the salt, there is one more thing you need to know. As we talked about in our book, Rich Food, Poor Food, it’s important to choose the right type of salt. What most people still don’t know is that there are two types of salt – natural unrefined salt and processed refined salt. Unfortunately, the majority of the salt used in our foods and at restaurants around the world is the processed form that has been refined and stripped of its natural mineral content. To make matters worse, refined salt usually contains additional undesirable additives like anti-caking agents (these include sodium silicoaluminate and sodium ferrocyanide) and even sugar (in the form of dextrose, which is often made from GMO corn). Would you ever have expected sugar to be hiding in your salt? It’s also been heated during processing and bleached in order to appear white!

However, the truth is that natural salt doesn’t undergo any of these processes, and will instead appear somewhat gray, brownish or pinkish in color and is jam-packed with as many as ninety minerals, including sodium, chloride, calcium, magnesium, potassium, iodine, silicon, sulfur, phosphorus, vanadium, and many more, all of which are nowhere to be found in conventional table salt. [7] [8] While iodine has been added back into many refined salts, thus marketed as “iodized,” it is only one of more than ninety minerals that had been removed.

If you’ve been cutting back on your salt intake or only use refined table salt, this is a good time to rethink salt. Start by swapping out your table salt (i.e. Morton’s Salt or similar) or your Kosher Salt (don’t let the coarse texture fool you – it's still refined) for a good unrefined salt. There are many good unrefined salts on the market. Some you may have heard of are Celtic salt, Himalayan salt, lava sea salt, Fleur de Sel or French gray. A good brand that has become easy to find and provides the right kind of natural salt that has not been refined whatsoever is Redmond Real Salt. Their salt is harvested at about three hundred feet below the earth’s surface in an ancient seabed located in Central Utah, which geologists have traced to have been around since the Jurassic Period. The salt contains over sixty trace minerals, and undergoes no refining processes whatsoever. It’s free of sugar, preservatives, additives, and unnecessary chemicals. What you see is what you get- pure, simple, and real. [9]

Our Final Word On Salt

Which brings us to the final word about salt-, which is that according to the research we explored above, the average person shouldn’t have to worry about over consuming it especially if they are eating a diet of real, unprocessed food. Unless you are consuming more than 4945 mg of sodium per day, the real health dangers associated with sodium are linked to consuming too little salt and becoming deficient in the essential mineral sodium. If you are a healthy individual, the research points to shooting for a daily intake of sodium between 2,645 milligrams and 4,945 milligrams per day. If you are have high blood pressure, while reducing your sodium intake to the lower end of that scale may help, reducing your intake to the AHA’s ideal recommendation of 1500 mg per day could create health problems that outweigh any potential benefits.

Instead, if you are suffering from high blood pressure and are looking for a nutrition-based solution, you may think about reading our latest book, The Micronutrient Miracle. In it, we have a Cardiovascular Health protocol specifically designed for individuals who are suffering from hypertension. We focus on becoming sufficient in the three micronutrients science has found to be effective at lowering blood pressure naturally – calcium, magnesium and potassium.

The bottom line is, if you are eating right, filling in any nutritional gaps in your diet through supplementation, managing stress, and exercising daily, then there is very little evidence that you need to worry about monitoring your salt intake. We do however want you to make a real effort to swap out that processed refined salt you may currently be using for a natural unrefined salt. And lastly, even though it’s important to work with your doctor if you do have high blood pressure, it’s also equally as important to remember that getting in enough salt- not too little, and not too much- is the right approach to staying healthy.

If you enjoyed our tip on how to choose the healthiest salt for your table then make sure to download the first 3 chapters of our grocery store guide, Rich Food, Poor Food, for FREE. You will get important information on ingredients to ditch in the food you eat. 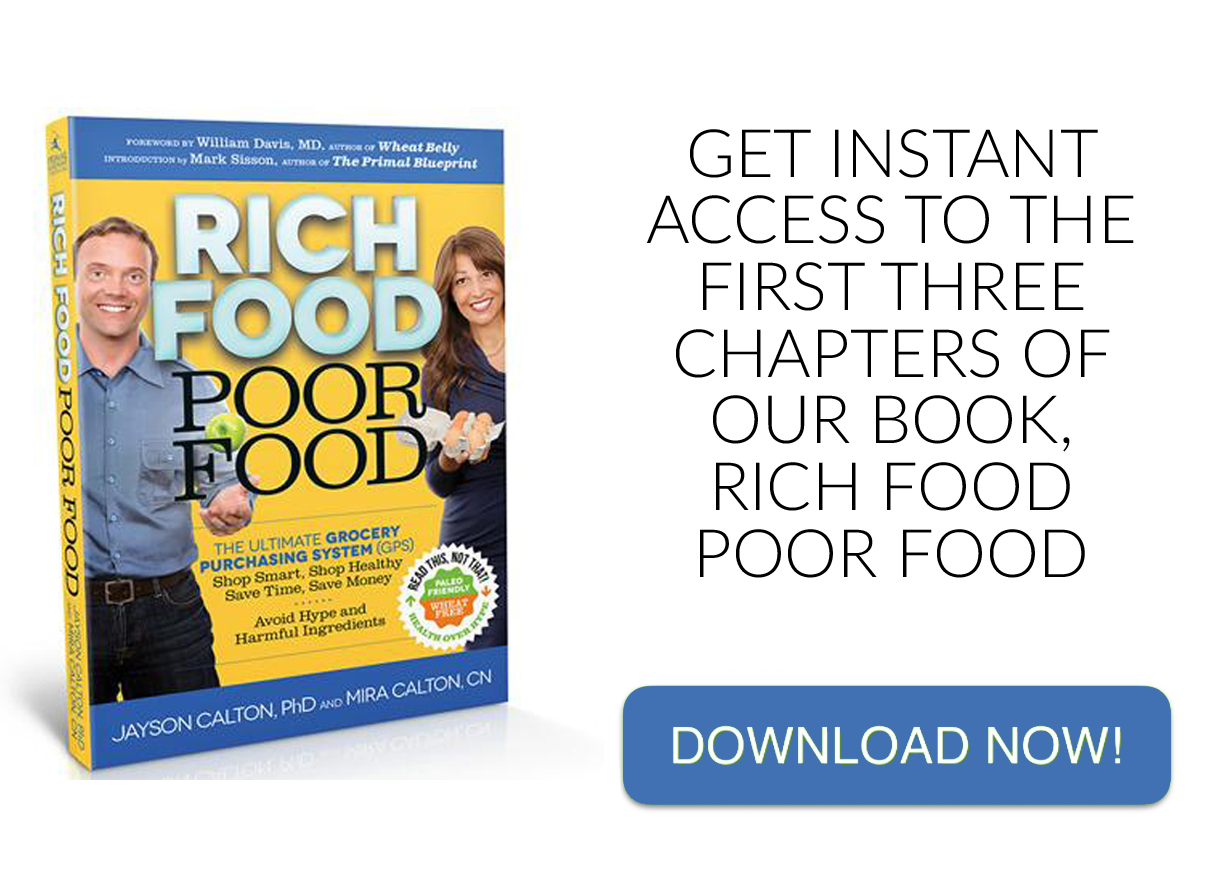