When we looked into why this was we found four common reasons they were not reaching micronutrient sufficiency for vitamin K2:

Some people had one of these issues and some had more than one. In this blog, we will take an in-depth look at vitamin K2, as well as these four issues and discover why each can block your ability to absorb your vitamin K2.

The Discovery of vitamin K

In 1929 Henrik Dam, a Danish scientist, observed that chickens fed a cholesterol-depleted diet developed hemorrhages and started bleeding. When, stunningly, these conditions could not be reversed with the addition of pure cholesterol in the chickens’ diet, it was surmised that an additional factor must have been extracted with the cholesterol in the first place. The Danish scientist named this newly discovered anti-hemorrhagic factor “Koagulationsvitamin,” which was later renamed vitamin K.

While most of us are familiar with vitamin K’s role in clotting blood and preventing uncontrolled bleeding, there is more to the vitamin K story. We now know that there are two forms of vitamin K, vitamin K1 and vitamin K2, and scientists are becoming more in awe of vitamin K2 for its role in preventing heart disease and osteoporosis! As nutrition experts who specialize in bone health, we constantly hear the media extoll the importance of vitamin D and calcium for strong bones, but often overlook the role of its fat-soluble partners in bone-building: vitamin A, vitamin E, and vitamin K. If you or someone you know is suffering from bone loss, s/he will not be able to successfully build, and maintain bone density without being sufficient in their essential micronutrients! That’s why in our new book, Rebuild Your Bones: The 12-Week Osteoporosis Protocol, we explain the role (and how to get) of each essential micronutrient that science has established is critical for your bone heath so you can better understand what to do, and why to do it, to prevent, stop or reverse osteoporosis! However, for this article, let’s laser in on the fat-soluble micronutrient – vitamin K, learn more about the two forms of this vitamin, how you can improve your levels, and what quantities are not only safe, but effective at improving bone density.

What is Vitamin K?

Vitamin K is also known as the molecular family of quinones and includes vitamin K1 (phylloquinone) from plants, K2 (menaquinone) made by bacteria, and there is even a synthetic K3 (menadione) which is not found in nature. Vitamin K1 and K2 are fat-soluble vitamins and cofactors for a group of gamma-carboxylase enzymes. Activated by vitamin K, these enzymes modify proteins by adding a carboxyl group to them to prepare them for action. These proteins that depend on vitamin K for activation are called GLa proteins.

Vitamin K1, aka phylloquinone. (and phytomenadione or phytonadione) is the vitamin K of plants and cyanobacteria. About 90% of most human dietary intake of vitamin K is in this K1 form. K1 helps add a carboxyl group to glutamate residues found in GLa protein clotting factors II (prothrombin), VII (proconvertin), IX, and X, [1] which are part of the cascade of reactions that

help blood clot. This is the reason why patients taking warfarin, the blood thinner that antagonizes vitamin K must take in relatively consistent amounts of vitamin K from day to day to avoid problems.

Vitamin K2, aka menaquinone, is the vitamin K of (intestinal) bacteria. Because ruminating animals use bacteria for the bulk of their green-plant-digestion, their guts are factories for vitamin K2. So is yours, to an extent – your good gut bacteria can convert vitamin K1 to K2, although the debate rages as to whether modern humans can convert an adequate amount of K1 to K2 to support basic functions. However, new research does not support these levels being adequate for heart or bone health- so we will continue to monitor and report new findings as we have them. This is important because K2 helps activate two major proteins that support calcium balance in your body- osteocalcin and matrix GLa protein.

Klear Arteries, Klotting on Kue, and a Strong Skeleton

Vitamin K really is an unsung hero. Here are some of its functions:

Vitamin K2 is far newer to nutritional researchers than K1, and thus it is a bit too early to make bold claims about vitamin K2 deficiency. Still, there are some obvious drawbacks to insufficient vitamin K2 levels, and there are well documented signs of vitamin K1 deficiency.

Who is likely to be vitamin K deficient? [7]

So what’s a nutrition-minded k-onsumer to do? Read on to learn about how to improve your vitamin K1 and K2 status from food, lifestyle adjustments, and supplementation.

STEP ONE – FOOD: Choose whole food sources of vitamin K1 from plants and vitamin K2 from animal and fermented foods. 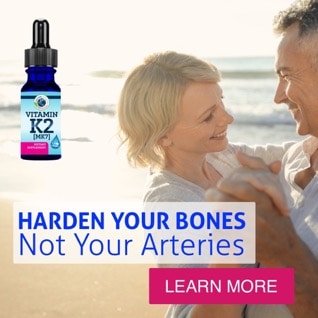 In conclusion, many of us are simultaneously concerned about heart and bone health- but that’s not all that vitamin K2 does for us. While a lot is known about the health benefits and functions of vitamin K1, we continue to learn more about the wonders of K2. We will keep the research-based recommendations coming. Moreover, the role of good gut bacteria in grazing animals boosts K2 levels, so the value of pasture-raised eggs, grass-fed meats, organic cheeses, and several high quality fermented foods that support health in a myriad of ways cannot be understated. Vitamin K2 really is the “X factor” that Dr. Weston A. Price said was present in many healthy cultural diets around the world-cultures with straight teeth, strong bones, and good longevity. We have come a long way in micronutrient research since then, and encourage you to take advantage! Check out our new book, Rebuild Your Bones, to learn the 40, clinically-proven, healing habits that you can use to start rebuilding your bones – today!