Your Weight Loss Resolution Plan for 2018

Are you resolved to lose weight and improve your health this year…naturally?

It is a new year and hundreds of thousands of individuals around the world are beginning 2018 with a promise to themselves, a New Years resolution, to lose weight. Actually, it is likely more like millions around the world. Why? Because obesity is a significant problem in the modern world, affecting over 78 million adults in the United States alone!

But what if obesity could be prevented? What if you could finally beat the battle of the bulge…naturally, without starvation diets or dangerous weight loss pills? What would it feel like to live in the body that you have imagined…strong and fit at your personal goal weight? In our newest book, The Micronutrient Miracle, we hypothesized that science would find micronutrient deficiency to be a root cause of the overweight/obesity epidemic. So we wanted to share with you a recent medical study that found just that.

When most people think of malnutrition they think of impoverished countries, underweight individuals and a state of simply not having access to or eating enough food. However, modern malnutrition is different, most of those who are obese are suffering from an entirely novel situation, wherein they are both overfed and undernourished! How can this be – you ask? The answer is our modern dilemma of the chronic consumption of energy-dense, micronutrient-poor foods, something we have termed “naked calories.”

In his book, In Defense of Food, Michael Pollan states, “A diet based on quantity rather than quality has ushered a new creature onto the world stage; the human being who manages to be both overfed and undernourished, two characteristics seldom found in the same body in the long natural history of our species.” In the year 2000, the number of overweight adults surpassed the number of those who are underweight for the first time in history. According to an article by the Food and Agriculture Organization of the United Nations (FAO), “Obesity is deceptive. Although obese people may appear well fed, they are often deficient in essential nutrients, leading to poor health and disease. The underweight and overweight share high levels of sickness and disability, shortened life spans, and reduced productivity.”

Science has shown us that the two groups, the hungry underweight and the well-fed overweight, both suffer from many of the same health conditions. What may not be as apparent is that they also share malnutrition in the form of micronutrient deficiency. This is caused by a lack of essential vitamins and minerals due to micronutrient-poor food (naked calories).

While we have been discussing this in our books for years, a recent study published in the scientific journal Obesity Surgery, by Peterson et al. (2015) out of Johns Hopkins, confirmed these findings. In the study, they examined the micronutrient status of 58 subjects set to undergo the Roux-en-Y form of gastric bypass surgery. The authors tested these pre-surgery patients for deficiencies in vitamins A, B1 [thiamine], B9 [folate], B12 [cobalamin], D, E and iron.

What did they find? Well, they concluded that the pre-operative bariatric group had significant malnutrition. Twenty percent of the subjects had three or more deficiencies, with a particularly large proportion being insufficient in iron and vitamin D. In fact, as many as 56.9% of the subjects had inadequate iron, while a staggering 92.9 % were deficient in vitamin D!!

It is widely understood and accepted that individuals who have this and the other weight loss surgeries will be at an increased risk for micronutrient deficiencies afterwards. After all, the Roux-en-Y procedure results in the creation of a smaller pouch of stomach that is then redirected. Deficiencies could obviously be caused by the procedure-induced decrease in food intake, food intolerances, reduced acid and enzyme output, and vomiting due to the bypassing of the sections of the intestine that facilitate absorption. And a review in the journal Current Drug Metabolism found that following bariatric surgery, there is a greater incidence of deficiency in vitamins A, B9, B12, D, E, K, calcium, iron, zinc and protein!

However, this recent study proved pre-existing micronutrient deficiencies to be statistically greater in obese patients compared to non-obese patient and suggests, as we stated years ago, that micronutrient deficiency could be a causative factor in obesity. Now, let’s just take a minute to digest that. In Naked Calories we stated, “If these contemporary theoretical perspectives were to be combined with current scientific research concerning the link between micronutrient deficiency and obesity, being overweight or obese would be viewed in an entirely different light. Instead of being wrongfully perceived as lazy, undisciplined overeaters, overweight and obese people would be seen for what they most likely are—individuals who are simply biochemically more in tune with their body’s need for their required essential micronutrients and are trying to achieve micronutrient sufficiency the only way that their bodies know how—by eating more food.” And this is exactly what we are beginning to discover. Obesity is a disease that is largely the result of consuming hyper-caloric, but micronutrient poor foods, which leaves the body desperately crying out for more food in an attempt to get the micronutrients it is missing – regardless of calorie intake.

Unfortunately, these surgeries, which are considered a gold standard in fighting the obesity epidemic, are contributing to the root cause of the condition by further increasing micronutrient deficiency. This is very similar to the current cardiovascular disease paradigm, where people are often prescribed statins that knowingly deplete coenzyme Q10, a micronutrient essential to proper heart function, with its deficiency independently associated with heart disease.

But the story doesn’t end there! As we discuss at length in The Micronutrient Miracle, the list of micronutrient deficiencies associated with overweight/obesity includes vitamins A, B1, B3, B6, B12 C, D, E, K, calcium, chromium, iodine, iron, magnesium, potassium, selenium, zinc, omega-3, alpha-lipoid acid and CoQ10. These all play a role as essential cofactors in proper carbohydrate, fat and protein metabolism, and in assisting neurotransmitters and other hormones in regulating hunger. Taking this into account, you can see how eating “naked calories,” can create a disconnect between the mind and body, leading to physiological need to over-consume food, which eventually leads to obesity.

Now, it would be bad enough if it stopped there, but many of the micronutrients we listed above as being associated with overweight/obesity are the same micronutrients charged with the maintenance of intestinal wall integrity. Their deficiency can result in increased intestinal permeability, or “leaky gut.” This makes sense given the correlation between leaky gut and the development of obesity. So not only is it important to simply consume enough micronutrients, it is important to insure that your gut health is in check so that you can properly absorb and utilize them.

A DAILY HABIT THAT OUSTS OBESITY!

So, how can you get your gut health in check while adding in the micronutrients needed to create satiety, reduce cravings and boost your metabolism naturally? Finding a simple daily solution to this task was our goal and that is why we created our delicious Triple Threat shakes! The combination of their ingredients is a triple punch to this obesity/gut issue. 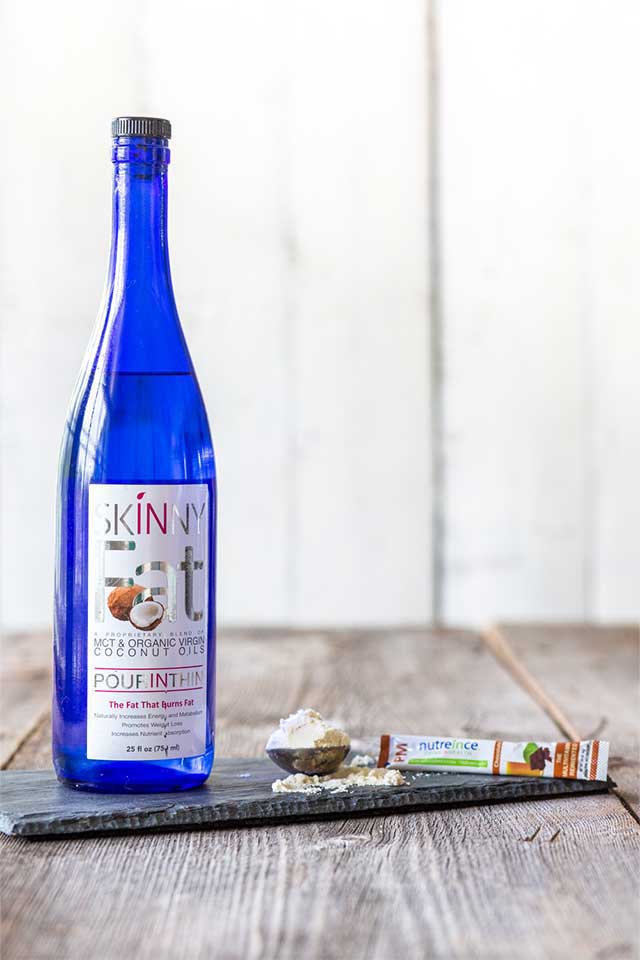 PUNCH ONE: Both our whey and plant IN.POWER protein powders are high in l-glutamine, which has been shown to assist in the maintenance of intestinal lining integrity.

PUNCH THREE: (The final and most devastating punch of all) taking our multivitamin nutreince that delivers a ton of essential micronutrients in a highly absorbable, non-competitive, delicious beverage addresses and eliminates the micronutrient deficiencies we have been talking about.

By combining IN.POWER Protein, SKINNYFat performance oil and nutreince multivitamin drink mix together into a Triple Threat, you are setting yourself up to fully optimize your micronutrient status everyday. As a FREE bonus we want to offer you our Triple Threat Recipe Book that will show you how to make delicious brain building, muscle building, metabolism boosting, micronutrient rich, protein shakes, puddings, ice creams and even cheesecakes! 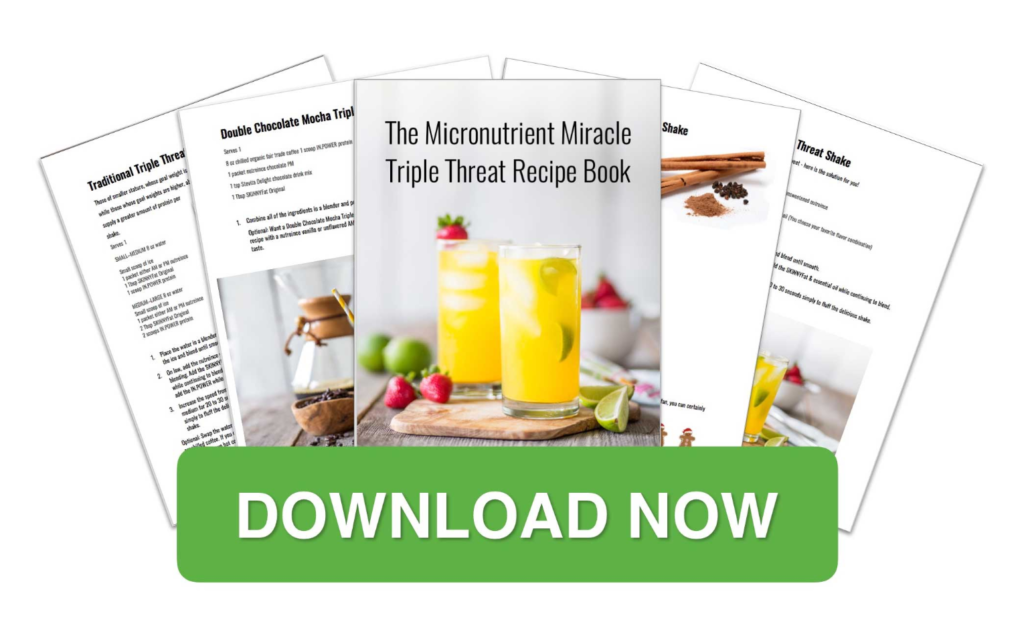 Want to make blending shakes super simple in the kitchen or super portable for travel? Check out the Tornado Blender Cups we just got in stock. They make blending a Triple Threat shake incredibly easy. No more blender messes or protein clumps. We promise!

And if you are ready to really transform you body and your health this year be sure to pick up a copy of our new book The Micronutrient Miracle, where you will find our signature 28-day meal plan and 8 condition specific protocols to help you lose weight, increase your energy, and truly achieve extraordinary health this 2018!