Which Omega-3 is Better For Lowering Triglyceride Levels?

We get asked this question a lot, “Which omega-3 should I take in order to reduce my triglycerides?” Is there a difference between plant-based oils, like flaxseed, chia seed, hemp seed or even echium seed oil, and traditional fish oils? Our answer is a resounding YES!

There is currently little evidence that plant-based oils, like flaxseed, chia seed, hemp seed or echium seed oils, help to lower high triglyceride levels. This is because plant-source omega-3s do not contain EPA or DHA, the ‘long-chain’ omega-3 fatty acids that are present in fish oil, which have been shown to produce the triglyceride-lowering effects and anti-inflammatory effects in the body. Instead, these plant-based seed oils contain a ‘short-chain’ omega-3 called ALA (alpha-linolenic acid), which must be converted within the body to EPA, and then to DHA.

However, this conversion is problematic because this conversion is very inefficient. In fact, the body only converts ALA to EPA and then to DHA at an efficiency rate of approximately 5 to 10 percent and 2 to 5 percent, respectively. The bottom line is taking a plant-base omega-3 product that delivers only ALA is not the same as taking a animal/algae based omega-3 that naturally contains already formed EPA and DHA. And this news is even more important for men who are taking omega-3 to lower their triglycerides or reduce inflammation because scientific studies have determined that men have a very hard time converting ALA to EPA – in fact, women convert ALA to EPA 2.5 times more efficiently than men.

The GREAT news is that fish oil supplementation has been shown to lower triglyceride levels. As we stated above, this is because animal/algae-source omega-3, unlike plant-based omega-3s, naturally contain both EPA and DHA, so there’s no conversion process necessary, and they can be directly absorbed. This means that consuming animal/algae-source omega-3s (such as fish oil) offers greater health benefits, including lowering triglyceride levels.

But, buyer beware…Here are 4 things to check before purchasing a fish oil to lower triglycerides:

1. Only purchase fish oil supplements that are in the triglyceride form. Research study after research study concludes that EPA and DHA from triglycerides are absorbed at dramatically higher percentages over the cheaper and less efficient form called ethyl esters. One study showed the EPA and DHA from triglycerides being 340% and 271% better absorbed, respectively, compared to those consumed as ethyl esters. This is a very important point – don’t think that just because you are taking a fish oil supplement that you are getting the EPA and DHA you need to reduce your triglycerides and inflammation. To test your current fish oil to see if it is in the superior, highly absorbable triglyceride form, follow the directions in the quick video HERE. (You’ll be amazed by this at home test!)

2. Only purchase fish oil supplements that deliver adequate amounts of EPA & DHA.  Just because your omega-3 supplement is from fish, krill or algae (3 sources that do contain EPA and DHA) that doesn’t mean that it contains beneficial quantities of EPA and DHA. In other words, it may not contain enough EPA and DHA to actually improve your health. Many omega-3 supplements advertise high levels of omega-3 (ALA), but upon closer examination only supply minimal levels of EPA and DHA. Omega-3 research shows that if you want to give yourself the best chance at achieving meaningful health benefits, your omega-3 supplement must contain high enough quantities of the two active components, EPA and DHA. A minimum of 1000 mg per day of EPA/DHA (not ALA) are required to begin to see benefits, and a clinical dose of 2500 mg per day of EPA/DHA is suggested for individual with high triglyceride levels or other inflammation related conditions. Read the labels carefully to insure that you are getting the beneficial quantities of both EPA and DHA—if the levels are low or are not listed move on. Higher concentrations save you money and require you to take fewer capsules.

3. Avoid oxidized fish oil supplements. Not only will this greatly reduce the fishy burps often associated with fish oil supplements, but it will also deliver higher levels of EPA and DHA! As oxidation occurs, the fish oil’s EPA and DHA content also decreases. Since the EPA and DHA molecules are the main workhorses of the omega-3 family, reduced EPA/DHA content means reduced efficacy of the oil. In a Spanish study, researchers divided 52 women into three different groups: one group that consumed less oxidized omega-3 capsules, one group that consumed highly oxidized omega-3 capsules, and a third group that received no capsules. After thirty days, they measured the women’s triglyceride and cholesterol levels. Only the women who received the less oxidized capsules had reduced triglyceride and cholesterol levels. This study also proved that, the women in the highly oxidized capsule group saw a negative impact on their cholesterol levels. The oxidized oil was not just less effective than the less oxidized oil; it actually increased their cholesterol levels producing a negative health consequence for the women. Always ask to see the TOTOX results from the fish oil manufacturer. Read more on rancidity HERE.

4. Only purchase fish oil that is formulated to eliminate the competition between EPA & DHA. Let’s discuss perhaps the most important issue of all; the fact that even if an omega-3 supplement were to deliver beneficial quantities of a triglyceride form animal/algae sourced omega-3 (containing both EPA and DHA), if the EPA and DHA are combined in the same dose, they reduce the absorption potential of each other due to inherent micronutrient competitions. This is because DHA has a relatively similar structure to EPA, which causes them to compete for the active absorption sites. Thus if EPA and DHA are at relatively equal levels in the omega-3 product they will compete for occupation of these active sites and reduce their overall activity. The purer the preparation of the EPA and DHA, or the more that these competitions are eliminated, the more likely is it be properly absorbed and utilized by the body. Scientists state that separating EPA and DHA and taking them at different times during the day will allow them to do their job more effectively.

Triglyceride Benefits Mirror Whole Body Benefits. To be clear, lowering one’s triglycerides levels are just one of the many benefits of EPA and DHA (numerous others are listed below.) Because of this an animal/algae sourced omega-3 product like fish oil, that naturally contains EPA and DHA always be deemed superior to plant-based oils for omega-3 content.

Fish oil has also been shown to have these additional health benefits:

And it can also save lives and money! Research by the Lewin Group shows that daily supplementation of 1,800 mg of omega-3 fatty acids (containing beneficial quantities of EPA and DHA) could reduce more than 380,000 hospitalizations due to coronary heart disease (CHD) over a 5 year period and save an estimated $3.1 billion over that same five years in CHD-related hospital and physician expenses. Additionally, according to research published in The Lancet, a diet with a omega-6 to omega-3 ratio of 4:1 or less (1:1 is optimal) may reduce total mortality by up to 70% over 2 years.

EPA and DHA are micronutrients too!

As you know our main focus is helping you create and maintain a state of micronutrient sufficiency (i.e. vitamins, minerals, essential fatty acids, and amino acids) and omega-3s essential fatty acids are one of those micronutrients! Once we understood everything we just went over in this article we searched everywhere for an omega-3 supplement that was sourced form wild caught (non-GMO) fish, was delivered in a triglyceride form, contained beneficial quantities of EPA/DHA, had third party testing to assure it was free of heavy metals and toxins, had TOTOX scores proving it was not oxidized, and most importantly was formulated to eliminate the competition between EPA and DHA for absorption sites.

In the end we could not find a single omega-3 supplement that met our rigorous, but essential requirements so we decided to create one that did! We believe Origin Omega is the highest quality fish oil supplement available anywhere! Our triple strength formulation is the first and only omega-3 supplement that delivers 1520 mg of EPA/DHA in each daily serving, at two completely different times during the day to naturally eliminate the competition between EPA and DHA for absorption. (Take two AM servings and two PM servings per day for clinical benefits)

We invite you to learn more about Origin Omega HERE. 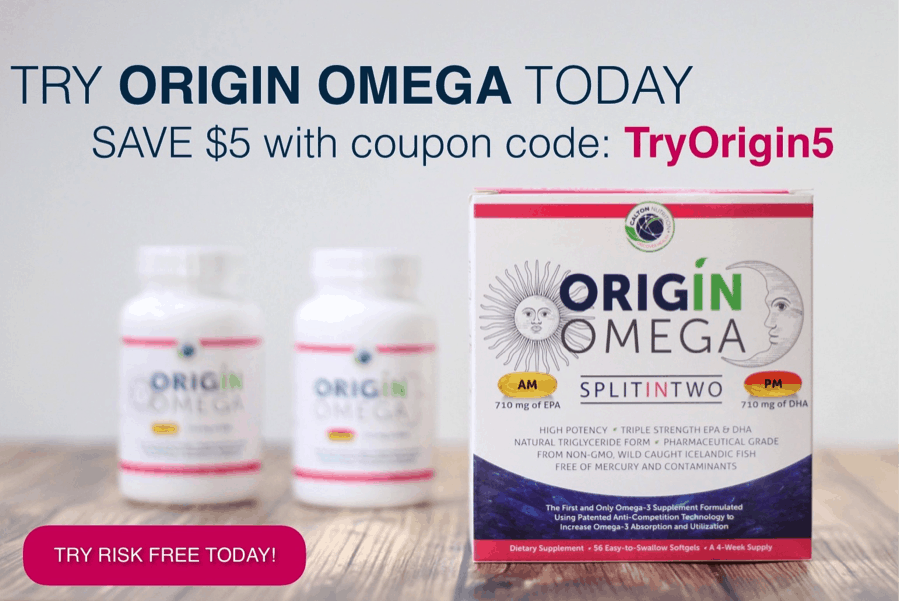